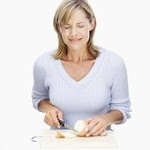 
.
In the UK when people want to say that someone knows what he/she is talking about, they say “He knows his onions.” The purpose of this page is to assist anyone to develop an increased awareness of food, its properties and how best to deal with it in the kitchen and at the table. What happens at the table can include your learned explanation as to the dish you have created or topics which arise during conversation. Your guests will say that you know your onions!

Cynthia Nelson knows her onions, too. Go to this website to learn about her Onion Gastronomy.
.
http://www.tasteslikehome.org/2008/06/immature-onions.html